Amazon updated their desktop reading app Kindle for PC and Kindle for Mac to version 1.19, it is a big step as the last major version 1.17 was released several months ago.

The Kindle for PC/Mac 1.19 has three major improvements:

Among all these important new features, the first one is the most important feature, and it’s also the worst new feature in my point of view. Let me explain why.

The enhanced typesettings engine requires the books be downloaded as .kfx extension name. This format of Kindle book is impossible to convert or decrypt (remove DRM). 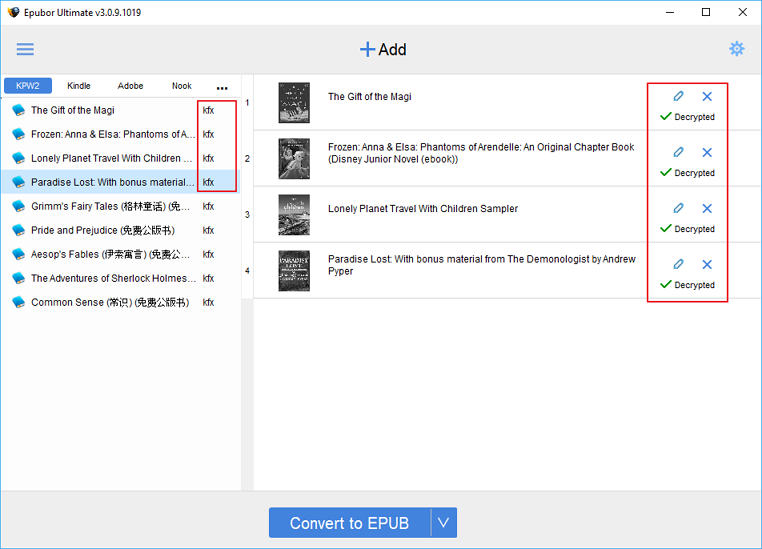 You can buy this software with 20% off here:

The KFX books are initially going live on Kindle Paperwhite 2 and later generations. In old days, if a book is downloaded as .kfx format in our Kindle eReaders, we can download them to computer with Kindle for PC/Mac reading app as .azw format, then easily remove DRM from them.

From now on, if our Kindle is Paperwhite 2 and later generations, we will not be able to remove DRM anymore, then we won’t be able to convert to print them anymore.

In this situation, if we still need to remove DRM, we have two solutions:

Why 1.17? Amazon finally would stop support for old version of Kindle desktop reading apps. Now Amazon has already abandoned version 1.14. As the most recent old version, 1.17 can last more days.

There is a hot discussion thread on MobileRead forum about the new version of Kindle desktop reading app and the coming DRM removing jeopardy. Most of eBook fans are holding negative views about the future of DRM removing, while some people think there definitely will be a way to crack the .kfx book in the future.

However, you can also check that thread and also share your thoughts about this issue.